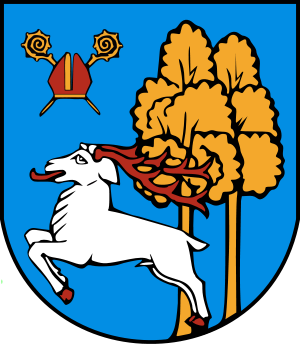 Origin/meaning :
The arms were officially granted on : ??

The arms of Ełk show a deer in front of two trees and a bishop's mitre and crosiers.

The oldest known seal of the city, dating from the middle of the 15th century, shows a deer coming from a forest. The meaning therof is not known, neither is it known whether this has actually been the arms of the city, or from the (larger) jurisdiction of Ełk.

On August 23, 1669 Prince Friedrich Wilhelm of Prussia granted the city of Lyck (as it was known then) new arms and a seal with a Janus head. The meaning of this is unknown, it has been explained as a symbol of old and new times, as a symbol for the border between Prussia and Lithuania/Russia or, unlikely, that at the time the mayor was named Janus. Until the 1950s the city used the Janushead, most often silver in black, but Hupp showed the head in the 1920s with a green field.

In the 1960s the city returned to the oldest seal and in 1967 officially adopted the new arms. In 1999 the small mitre and crosiers were added.