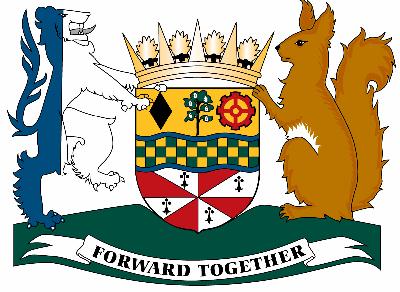 Per fess Or and gyronny of Ermine and Gules, a fess wavy Or and Vert edged Azure, and in a pine tree fructed Proper oetvveen. dexter, a lozenge Sable and sinister, cogwheel Gules. Above the Shield is placed a appropriate to a statutory Area Council, videlicet: - issuant from a circlet eight paling piles (three and two halves visible) Or and eight garbs (four visible) of the Last, banded Sable - on a Compartment below the Shield are set for Supporters. dexter, a lion per pale Azure and Argent, armed and langued Or, and sinister, a red squirrel Proper, and in an Escrol below the same this Motto "Forward Together".

The coat of arms features most of the elements from the Kilmarnock and Loudoun arms and the Cumnock and Doon Valley arms. New additions include; an engineering symbol, signifying the area's rich engineering past, a new motto 'forward together' as well as the addition of supporters to the shield.

The shield consists of a coronet of garbs of corn and peaks. The shield is then divided into three sections, the top section contains elements representing coal and a fir tree (both of which are derived from the Cumnock and Doon Valley arms) and an engineering cog.

The middle section has been lifted from the arms of the Boyds family of Kilmarnock but is bordered at the top and the bottom with a wavy blue line signifying East Ayrshire's two river valleys (Irvine Valley and Doon Valley).

The bottom third of the shield is derived from the arms of the the Campbell family of Loudoun.

The supporters are the Red Squirrel from the original Kilmarnock arms and a lion from the Cumnock arms. The lion is painted in two colours in keeping with the original colouring.