From Heraldry of the World
Your site history : East Barnet
Jump to navigation Jump to search 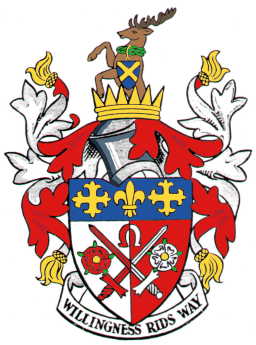 Arms: Per pale Argent and Gules two Swords in saltire between in chief a capital letter Omega and in fesse two Roses all counter-changed the Roses barbed and seeded proper on a Chief Azure a Fleur de lys between two Crosses Flory Or.
Crest: Out of an Eastern Crown [of ten rays six visible] Or a demi Hart gorged with a wreath of Oak Leaves proper pendent therefrom by a Chain Or an Escutcheon Azure charged with a Saltire Gold, Mantled Gules doubled Argent.
Motto: 'WILLINGNESS RIDS WAY'.

The shield which was in use before the arms were granted, has as its principal motifs swords, roses and an Omega (last letter of the Greek alphabet) referring to the Wars of the Roses , the last battle of which was fought at Hadley Green within the district, in 1471. The two crosses and the fleur de lys refer to the Parish Church of St. Mary, East Barnet.

The wreath is in the Lancastrian and Yorkist colours of red and white. The Eastern crown distinguishes the authority from its neighbour, the six rays referring to the six wards of the District. The hart is derived from the supporters of the Hertfordshire CC, the wreath of oak is for the woods of the district, particularly Oak Hill. The shield hanging from the wreath shows the arms of the Abbey of St. Albans, whose monks had much to do with the early communal life of the district and with the Parish Church.

The motto which means "Determination ensures progress", is taken from the speech of King Edward IV after the Battle of Barnet, in Shakespeare's King Henry VI, Part III.