Incorporated into : 1974 Forest of Dean 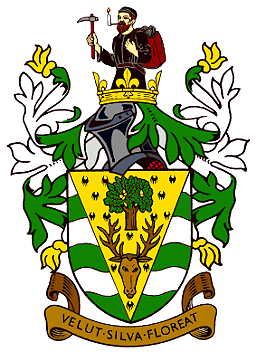 Arms: Barry wavy of six Argent and Vert on a Pile Erminois in chief an Oak Tree couped proper fructed with eleven Acorns Or and in base a Stag's Head caboshed also proper.
Crest: Issuant from a Coronet composed of four Fleurs-de-Lys set on a Rim Or a demi figure representing an ancient Forest of Dean Miner capped and habited Sable in his mouth a Stick transfixing a Candle enflamed proper holding in the dexter hand a Pick erect and carrying over the sinister shoulder a Hod of Coal also proper.
Motto: 'VELUT SILVA FLOREAT' - May she flourish as the Forest.

The arms were officially granted on April 9, 1954.

The golden pile between the green and white waves represents the topographical character of the District, wedged between the rivers Severn and Wye. The stag's head and oak tree, carrying eleven acorns for the eleven East Dean parishes, indicates the ancient Forest of Dean, against a background of the royal colours gold and ermine.

The ancient crown of fleurs-de-lys is another reference to the Royal Forest, and from it rises the old Forest of Dean miner, derived from an old brass engraving known as "the Miners Brass" in All Saints Church, Newland. This shows a Forest miner with a candle in his mouth, a pick axe in his hand, and a hod. This has become one of the symbols of the Forest of Dean.

Literature : Information provided by the Forest of Dean council.