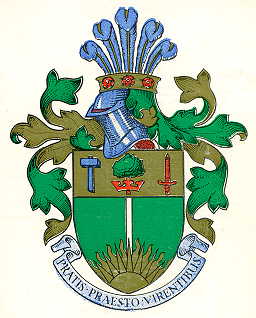 Arms : Vert a Pallet Argent surmounted of a Sun rising issuant from the base Or on a Chief of the last an Ash Tree couped proper enfiled by an Ancient Crown Gules between a Hammer Sable and a Sword in its scabbard also Gules garnished also Argent.
Crest :Issuant from a Circlet Or charged with three Roses Gules barbed and seeded proper a Plume of five Ostrich Feathers Azure the quills Gold; Mantled Vert doubled Or.
Motto: 'PRATIS PRAESTO VIRENTIBUS' - Amid green meadows I proudly stand

The arms were officially granted on September 9, 1955.

The green background refers to the first syllable of 'Grinstead' and therefore the derivation of the name meaning ' Green Place '. The white line represents the meridan of Green­wich running through the town and the rising sun 'East'. The hammer is to recall the local iron industry, the sword the Assizes (lost to the town in 1799) and the ash tree Ashdown Forest, with a crown because it was royal property.

In 1572 Thomas Cure, Member of Parliament for the former Borough, presented a seal: five blue ostrich feathers with gold tips, his initials and those of the Duchy of Lancaster, of which the town was part. The Borough was disenfranchised in 1832 and the device used by the Urban District Council before the arms the current arms were granted. The feathers are here repeated, with three red roses of the house of Lan­caster. In the past the red rose of Lancaster surmounted by a ducal coronet has also been attributed to the town.

The arms are continued by the East Grinstead Town Council