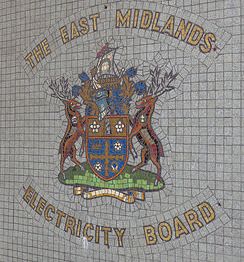 Arms : Azure, a cross raguly couped between in the first quarter an antique crown, in the fourth quarter a fetterlock Or, in the second and third quarters a rose argent, barbed and seeded proper; on a chief of the second a bear supporting a ragged staff sable between two cinquefoils ermine.
Crest: On a wreath of the colours, A Viking's ship, oars in action, Or, the sail argent charged with a horseshoe sable, pennant flying gules. .
Supporters: On either side a stag proper, that to the dexter charged on the shoulder with a plate, thereon a Stafford · knot sable, and that to the sinister charged on the shoulder with a roundel per chevron a cross at the point vert and argent.
Motto: Feliciter servimus