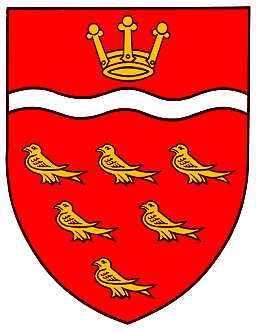 Gules six Martlets three two one Or a Barrulet wavy enhanced Argent in chief a Saxon Crown Or.

The arms are a variation on those attributed to the Kingdom of Sussex. The gold crown represents the South Saxons and the red background provides a contrast to the blue background of the similar West Sussex arms.

The arms are based on those granted to the previous East Sussex CC on 10th September 1937.
In 1974 the County Boroughs of Brighton, Eastbourne and Hastings were added to the county and part transferred to West Sussex. The white wavy bar was added for difference to reflect the changes, as any change of area or population by 10% meant that the arms of a predecessor meant the arms could no longer be used.