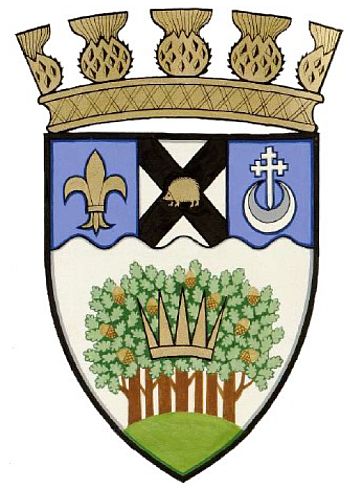 Argent, issuant from a mount in base, a wood of oak trees fructed Proper, charged with an eastern crown Or; on a chief wavy Azure, on a pale of the First a saltire Sable charged in the centre with a hedgehog of the Second, in dexter chief a fleur-de­ lis of the Last, and in sinister chief a cross-crosslet fitchee issuant from a crescent of the First.

The arms show in the base a canting oak forest, with an Eastern crown. The chief shows symbols taken from the arms of the three most influential families in the history of the region; the fleur-de-lys for the Montgomery family, the black cross with the hedgehog for the Maxwell of Caerlaverock family and the cross and crescent for the Cathcart of Cathcart family. The wavy division line symbolises the Cart river.