From Heraldry of the World
Your site history : Eccles
Jump to navigation Jump to search 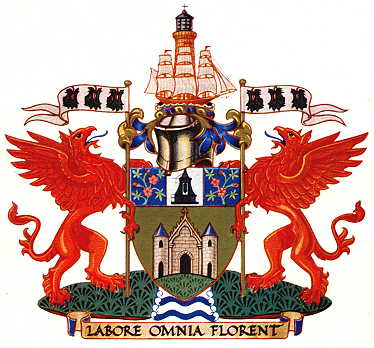 Arms : Or on a Mount Vert the front elevation of an Ecclesiastical Building masoned proper a Chief Azure thereon between two Sprigs of the Cotton Tree slipped and fructed of the third a Pale Argent charged with a representation of a Nasmyth Steamhammer Sable.
Crest : On a Wreath of the Colours in front of a Rock surmounted by a Lighthouse a Ship under sail to the sinister all proper.
Supporters : On either side a Griffin Gules supporting between the forelegs a Staff Or flying therefrom a forked Pennon Argent charged with three Boars' Heads erased and erect in fess Sable langued Gules.
Motto: 'LABORE OMNIA FLORENT' - Everything prospers through effort.

The arms were officially granted on November 7, 1893. Supporters and badge granted 5th July 1966.

The "ecclesiastical building" gives a play on the name. The steamhammer commemorates James Nasmyth's chief invention and his association with Eccles, and with the cogwheel and cotton sprigs, refers to the principal local industries.

The lighthouse, ship, and waves allude to the importance to Eccles of the Manchester Ship Canal and its situation on the River Irwell.

The roses of the badge refer to Lancashire and correspond to the number of wards constituting the borough.