From Heraldry of the World
Your site history : Ecclesiastical Province of Canada
Jump to navigation Jump to search 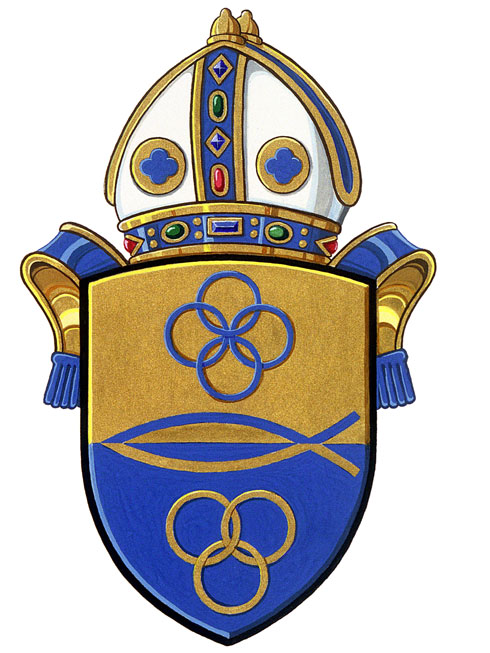 The four annulets at the top of the shield represent the original four dioceses of the Province (Quebec, Montreal, Toronto, and Huron) and the four dioceses of the Province for most of its history (Nova Scotia, Quebec, Montreal, and Fredericton). Their shape makes a reference to the bishop’s ring, a symbol of authority, and they are interlaced to indicate unity and collegiality, forming the basic Christian symbol of the cross.
The interlacings also create a saltire (a diagonal cross), which appears on the arms of the diocese of Nova Scotia, and, as such, honours the fact that Nova Scotia was the first diocese in Canada.

The three annulets in the lower part of the shield indicate Newfoundland, which was originally a single diocese, but which was later divided into three.

At the centre of the shield is the ichthus, one of the earliest Christian symbols, found where the followers of Jesus met in secret. Ichthus means fish in Greek, and its letters are an acronym for “Jesus Christ, Son of God, Saviour”, also in Greek. Fishing is a notable activity in the Gospels as Christ called his disciples to be “fishers of men,” and the symbol is an appropriate one for the Province considering how important the fishing industry has been in the economy of eastern Canada. The shield uses two colours, blue and gold, the former being a reference to the sea and the Atlantic Ocean in particular.

Literature : Information and image from here