From Heraldry of the World
Your site history : Echthausen
Jump to navigation Jump to search 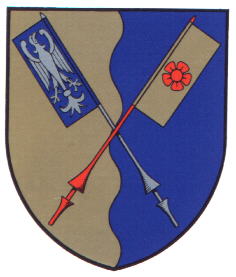 The arms were officially granted on December 4, 1962.

The arms are divided by a wavy pale, which symbolises the Ruhr river. The two crossed banners refer to the battle in 1185 near the bridge in the present village between Gottfried II, Count of Arnsberg, and five other counts, especially Engelbert, Count of Berg. The banners show therefore the silver eagle of Arnsberg and the rose of Berg.