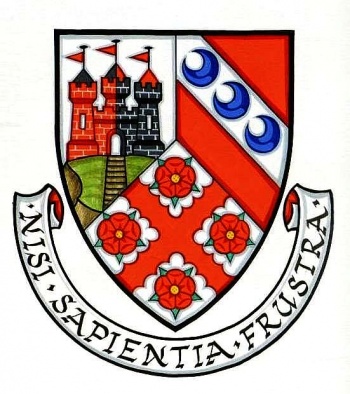 Tierced in pairle reversed; 1st, Argent, a castle triple-towered parted per pale Gules and Sable upon a rock Proper, roofs counterchanged, masoning, two windows and port of the First; 2nd; Gules, on a bend Argent three crescents Azure; 3rd, Argent a saltire engrailed Gules cantoned between four roses of the Second, barbed Vert and seeded Or.

The university takes its name from the Scottish mathematician John Napier of Merchiston (1550-1617), the inventor of logarithms, whose birthplace, Merchiston Castle, is now part of one of the university’s campuses. His arms appear in the top right part of the shield. The arms of the City of Edinburgh, as founders of Napier College, appear in the top left part. The lower part of the shield shows the modern arms used by the representer of the Napier family, which had owned the lands where the new college had been built for 400 years.