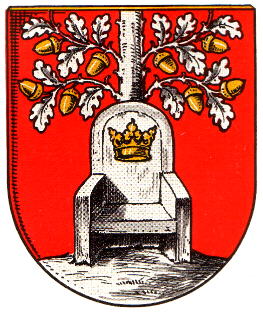 The arms show the Royal Chair of Gudingen. This was place where in medieval times the German Kings, or their vassals, held a court of justice. This was always done under a huge oak tree. The arms symbolise the chair, the royal crown and the oak tree.
Historically, the city used seals with the patron saint, St. James.