Incorporated into : 1974 Ellesmere Port and Neston (2009 Cheshire West and Chester) 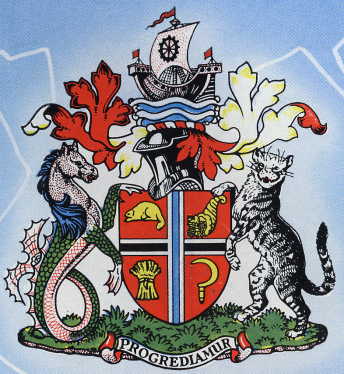 Arms : Gules on a Bar Argent a Barrulet Sable surmounted of a Pale also Argent thereon a Pallet Azure in the first quarter a Beaver in the second a Cornucopia inverted in the third a a Garb and in the fourth a Sickle all Or.
Crest : On a Wreath of the Colours on Water barry wavy a Lymphad sail set proper and charged with a Cogwheel Sable flags and pennon flying Gules.
Supporters : On the dexter side a Sea Horse and on the sinister side a Tabby Cat quardant both proper.
Motto: 'PROGREDIAMUR'

The arms were officially granted on October 6, 1955.

The blue and white wavy lines symbolise the River Mersey, and the ancient ship denotes the Borough's status as a Port and its ancient maritime associations. The cogwheel is another symbolic reference to industry.

The Sea Horse is a further reference to the Borough's connection with the sea, while the symbolism of the tabby cat with its "Cheshire Grin" is self-evident.