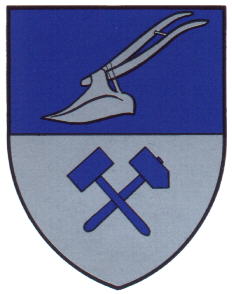 The arms show symbols of the main activities at the time, a plough for agriculture and miner's tools for the mining in the area. The colours are those of the Lords (Vögte) of Elspe from the 12th century until 1500, when the area became part of the State of Köln.