From Heraldry of the World
Your site history : Elsterberg
Jump to navigation Jump to search 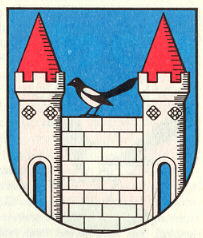 The arms show a two-towered castle with between the towers a canting magpie (Elster in German). The oldest seals of the city date from 1460 and show only the tower.

The magpie was only added in the 19th century to distinguish the arms from similar arms with a castle. The colours as shown above have been used since the middle of the 20th century.