From Heraldry of the World
Your site history : Enfield (South Australia)
Jump to navigation Jump to search 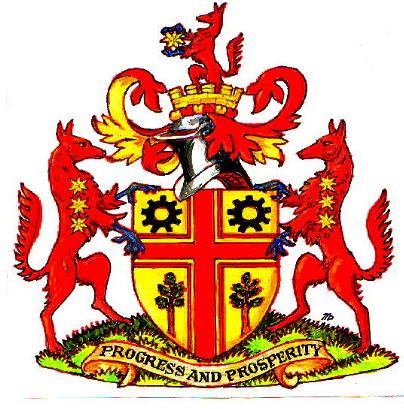 The red enfields, heraldic monsters with the body of a wolf, head of a fox, and talons of an eagle, come from the arms of Enfield in London, differenced by the seven-pointed star from the Australian Commonwealth crest.

The string of three alludes to three significant dates for the South Australian city: 1853 (District Council), 1944 (Municipality), and 1953 (City). The main feature on the shield itself is the long cross, referring to St Clement's Church and the religious faith of the early settlers. Its long arm alludes to the Main North Road, which Enfield straddles, while the narrow edges refer to the two waterways which bound the city.

The cypress pines recall those which grew in the area at the time of European settlement, while the cogwheels symbolize modern industrial activity.
The mural crown is a symbol of civic authority and the city's colours of maroon and gold are dominant in the arms.