From Heraldry of the World
Your site history : Engineering Council
Jump to navigation Jump to search 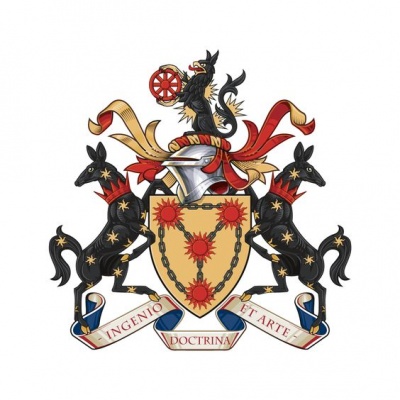 The Arms depict suns representing energy duly chained and thus controlled to the benefit of mankind.

The Crest shows a male gryphon. The gryphon was anciently a creature associated with the sun. The male version is peculiar to English heraldry and emits sparks of fire from various parts of his body, fire again being another form of energy. The gryphon holds a wheel as an allusion to the antiquity of engineering.

The supporters with rayonny coronets about their necks are two pantheons. These heraldic beasts originated in the fifteenth century and were held to live among the stars “as creatures of the universe”, and thus symbolic of the universality of engineering and its dependence on energy.