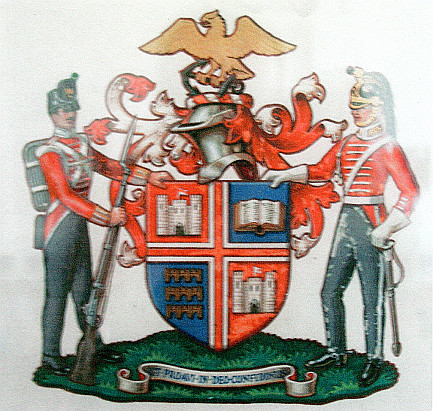 Arms : Quarterly gules and azure, a cross argent charged with another cross of the first between in the first and fourth quarters a castle with portcullis raised of the third, flying therefrom a banner of St. George, in the second quarter an open book proper, garnished Or, and in the third quarter three bridges of as many arches in pale of the last.
Crest : On a wreath of the colours, Perched upon an anchor fessewise sable an eagle, wings displayed, Or.
Supporters : On the dexter side a Private of tle 27th (or Inniskilling) Regiment of Foot and on the sinister side an Officer of the 6th (or Inniskilling) Regiment of Dragoons, each in the uniform of the period 1815.
Motto: Ut proavi in Deo confidemus