From Heraldry of the World
Your site history : Erfelden
Jump to navigation Jump to search 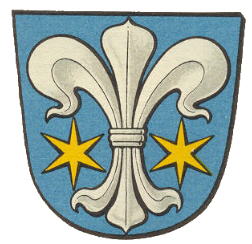 The arms are derived from the two historical seals of the village; the oldest dating from 1599, the second from the 19th century. Unfortunately, the meaning of the symbols on the seals is not known. The colours, chosen in 1925, were of no historical meaning, but were chosen on the basis of aesthetics.