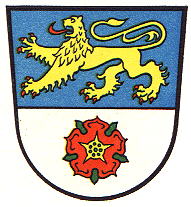 Erkelenz received city rights in 1326 from Count Reinald III of Geldern, to be a fortified town against Jülich. The oldest seal, known from 1331 already shows the symbols of Geldern, lion and flower. All later seals and images show the same composition.

The arms thus have never changed since. The arms were formally granted after the merger of 1971, on October 27, 1972.