From Heraldry of the World
Your site history : Esher
Jump to navigation Jump to search 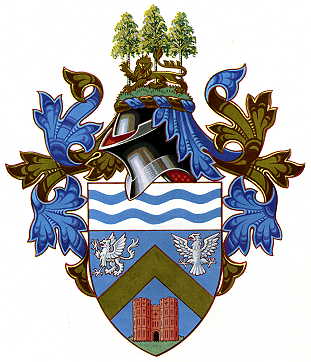 Arms : Azure a Chevron Or between in dexter chief a Griffin passant in sinister chief an Eagle displayed Argent and in base on a Mount Vert a representation of Wayneflete's Tower at Esher Place proper a Chief Argent charged with two Barrulets of the first.
Crest : On a Wreath of the Colours on a Mount Vert in front of three Silver Birch Trees a Lion passant Guardant Or.

The gold chevron on blue is from the ancient arms of the d'Abernons, Lords of the Manor of Stoke D'Abernon in the Middle Ages. Above are a white griffin from the arms of the Evelyns of Wotton and also those of Cardinal Wolsey, who resided for a time at Waynflete's Tower, which is shown in the base. The white eagle comes from the arms of Merton Priory, which held lands in Molesey for 400 years. The two blue waves on white refer to the rivers Mole and Ember and the parts of the district by the Thames.

The wreath and mantling are in the liveries of the County Council, blue and gold. The Royal Lion alludes to the associations of the district with the Royal family and the three silver birches to the wealth of the district in commons and woodlands.