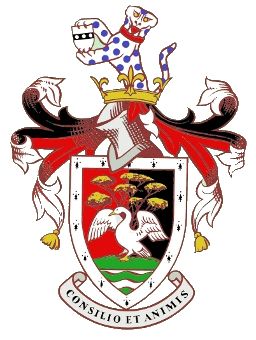 Arms : Per pale gules and sable, issuant from a plain base barry wavy of four argent and vert a mount of the last, thereon in front of a beech tree Or a swan, wings displayed and inverted, proper; all within a bordure ermine.
Crest : Out of a coronet composed of four fleurs-de-lys gules set upon a rim Or a demi panther guardant argent semee of hurts, collared gules and holding between the paws an escutcheon also argent charged with a fesse sable thereon three plates. Mantled gules and sable, doubled argent.
Motto: 'CONSILIO ET ANIMIS' - By wisdom and courage

The arms were officially granted on November 18, 1960.

The crest is composed of emblems denoting several notable families having historical links with the District. The white panther spotted with blue (Palmer, of Dorney) wearing a red collar (Desborough, of Taplow) and holding a shield of the Penn Family.