From Heraldry of the World
Your site history : Ettlingen
Jump to navigation Jump to search 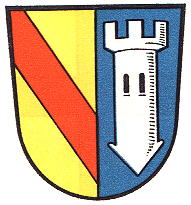 Ettlingen received city rights around 1234 and the oldest seal dates from the same time. The oldest seal showed the bend of Baden crossed with a key. The city was a possession of the Margraves of Baden since 1234, who were the successors of the Weissenburg Abbey. The key is the symbol of St. Peter, the patron saint of Weissenburg Abbey. In the early 14th century the key was replaced by the canting white tower of Weissenburg. The blue and silver colours of the tower were defined in the 19th century and are the colours of the State of Speyer, as the bishops of Speyer had much influence in the area.