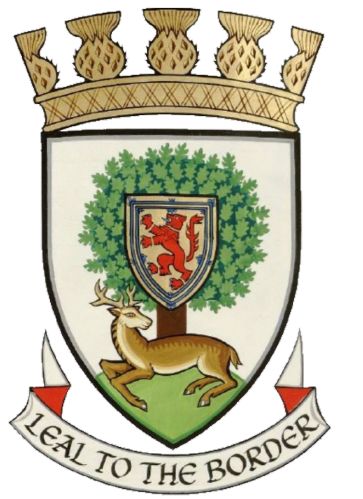 Argent, on a mount in base a stag lodged reguardant in front of an oak tree, all Proper, the tree charged of an inescutcheon of the arms of the Earl of Lauderdale, videlicet:- Or, a lion rampant Gules couped at all his joints of the field, within the Royal Tressure Azure.

Above the Shield is placed a coronet appropriate to a statutory District, videlicet:-a circlet richly chased, from which are issuant eight thistle-heads (three and two halves visible) Or; and in an Escrol under the Shield this Motto "Leal to the Border".

The arms were officially granted on September 9, 1975.

The arms are those of the former county of Selkirkshire with an inescutcheon bearing the arms of Maitland, Earl of Lauderdale, to represent Lauderdale, and with a crown.