From Heraldry of the World
Your site history : Eucalol
Jump to navigation Jump to search 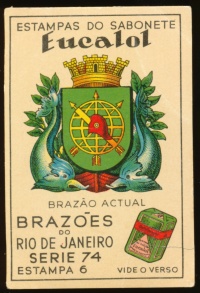 Eucalol was a brand of Brazilian soap, toothpaste and talcum powder.

In 1917, in St. Peter Street located in downtown Rio de Janeiro, the German immigrant Paul Stern founded the company CORREA DA SILVA & CIA LTDA. with the sales of essences, which were manufactured on the floor above the store. After the 1st World War his brother, Ricardo Stern, joined the company and streamlined it, so in 1923 began the construction of a factory at Rua Ribeiro Guimarães No. 15, opened around 1924. In the new plants the company changed its name to PAUL STERN & Cia. and expanded the line of products, initially releasing the soap EUCALOL and later toothpaste and talc.

The soaps that were made at the time were pink or white, and Eucalol, being derived from eucalyptus, was green, leading to a reasonable rejection of consumers with little subsequent sale.

The brothers Stern remembered the prints of Liebig that were so successful in Europe and decided to launch the Estampas Eucalol, inviting the public to collecting them, starting with a notice published in the supplement of the journal 'Night" on June 11, 1930.

The success was resounding, children and adults collected the stamps boosting the sales of soap and the company grew rapidly. In 1932 the company changed its name to PERFUMERY Myrta S / A.

From 1930 to 1957, when they issued the latest prints, 54 subjects distributed over 2400 cards were printed. All series had 6 cards and 6 series (72-77) dealt with heraldic themes. These are shown below. The exact date of publishing I do not know, but probably early 1940s.

The prints are well known in Latin America especially, obviously, in Brazil.

The cards were at least reprinted once and had some advertisement on the back.