Difference between revisions of "Euskirchen"

From Heraldry of the World
Your site history : Euskirchen
Jump to navigation Jump to search 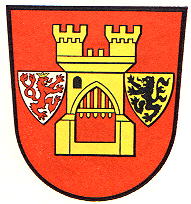 Euskirchen received city rights in 1304 from the Counts of Monschau-Falkenburg-Limburg. The oldest seal dates from the same time and shows a gate with two towers and two small shields, each with the two-tailed lion of Limburg. The second known seal dates from the 18th century and shows the same composition. The left lion, however is now changed into the black lion of Jülich, as the Dukes of Jülich acquired the city in 1368. The arms are thus identical to the latter seal. The additions in 1969 did not have an effect on the arms.

In the early 20th century the arms below were shown in the Kaffee Hag albums. These arms show the basically the same elements, but in a different composition, see below.