Difference between revisions of "Euskirchen (kreis)"

From Heraldry of the World
Your site history : Euskirchen (kreis)
Jump to navigation Jump to search 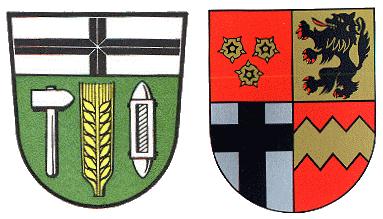 The first arms show the three main symbols of income of the time; a hammer for the mining industry, a wheat ear for agriculture and the spindle for the textile industry. The upper part of the arms show the arms of the State of Köln, as the bishops of Köln ruled the largest part of the county. The arms were granted with two supporters; on the left side a red lion, crowned gold, on the right side a black lion, tongued red. The red lion is the lion of Valkenburg and represents the fact that the city of Euskirchen received city rights form the Lords of Monschau-Valkenburg in 1302. The black lion is the lion of Jülich, who also owned parts of the county.

The new arms represent the four main dynasties/territories of which the new county is made of; the first quarter shows the roses of the counts of Arenberg; the second quarter the lion of Jülich, the third the cross of Köln and the fourth the arms of the counts of Manderscheid-Blankenheim.