From Heraldry of the World
Your site history : Fürstenberg (Hüfingen)
Jump to navigation Jump to search 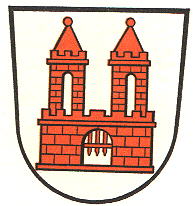 The arms were officially granted on October 8, 1959.

In 1218 the local castle became a possession of the Counts of Urach-Freiburg, who founded a village around the castle and grated city rights in 1278. The oldest seal dates from the same time and clearly shows the castle. Although the shape, size and colour of the castle has changed during the times, according to fashion, the arms basically never changed. The present colours and shape are in use since around 1900 and show rather accurately the image of the oldest seal.