From Heraldry of the World
Your site history : Farnborough
Jump to navigation Jump to search 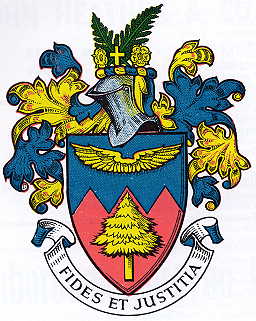 Arms : Per fess dancettée Azure and Gules in chief two Wings conjoined and expabded fesswise and in base a Fir Tree couped Or.
Crest : On a Wreath of the Colours in front of two Fern Leaves in saltire Vert a a Cross couped between two Roses Or.
Motto: 'FIDES ET JUSTITIA' - Faith and justice.

The three points formed by the division of the shield refers to three turmuli in thre district and suggests its antiquities. The wings allude to the Royal Air Force, of which Farnborough was the birthplace and the fir tree stands for the pine woods prominent in the area.

The fern leaves refer to the derivation of the place name from Ferneberga. The cross symbolises the town's religious life and the roses derive from the insignia of the County.

Literature : Image and information from Scott-Giles, 1953 and here