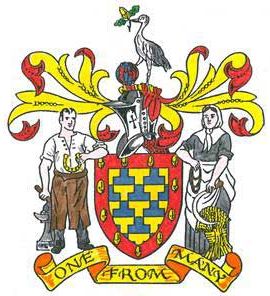 The arms were officially granted on April 5, 1997.

The crane is the traditional bird of learning. The French for a crane’s foot is ‘Pied-d-grue’ from which we get the word Pedigree. The crane normally holds a stone but in this case it is a globe of the world to represent the world wide membership of the Federation.

The supporters are one from each sex to denote our equal descent from both; an artisan and an agricultural labourer to represent the majority of our ancestors. The blacksmith is from the arms of the City of Birmingham where our foundation meeting was held but in this case he holds a horseshoe taken from the arms of our founder Chairman and first President.