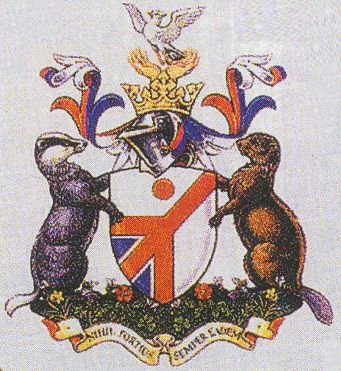 Arms : Argent a Bend Sinister conjoined at the fess point with a Bar to the dexter and a Pale to the base Gules in Chief a Torteau and issuant beneath the bar from the dexter side a Gyron Azure and in dexter base another Gyron also Azure.
Crest: Upon a Helm with Mantling Gules and Azure doubled Argent in a Crest Coronet Or two cubit Arms the hands outspread cupped and releasing a Dove rising all proper.
Supporters: On the dexter side a Badger and on the sinister side a Beaver both sejant erect proper the Compartment comprising a grassy mound growing therefrom on either side a Daffodil and a Thistle both stalked and leaved also proper next to each Thistle a Rose Gules barbed and seeded slipped and leaved proper and near the Rose a Trefoil slipped Vert each Daffodil, Thistle, Rose and Trefoil beset by a Bee also proper.
Motto: NIHIL FORTIUS SEMPER EADEM

The shield is the heraldic translation of the old symbol used by the Federation, representing the "little man" logo made from one quarter of the Union Flag: to show that it is a National organisation and that, as a sector, it employs approximately one quarter of the nation's work-force and generate roughly one quarter of the Gross National Product. It is set on a white field to represent the "white" economy as opposed to the black one.

The shield rests on a Compartment which is a green mound set with the floral emblems of the nations of the United Kingdom - i.e. Roses for England, Shamrocks for Northern Ireland, Thistles for Scotland and Daffodils for Wales. Again this shows that it is a National organisation and each flower is beset by bees, a traditional heraldic allusion to industriousness and keeping busy.

The badger has a dual purpose - the members are constantly badgered by the authorities and bureaucrats while the Federation, in its turn, badgers Whitehall, Westminster and Brussels. The supporter on the sinister side is a beaver - again for "beavering away" and being constructive and industrious.

The hands indicate artisanship, craftsmanship and the fact that we create by our own hands and effort. The white dove shows the free spirit of enterprise being released, showing the basic ethos of freedom from bureaucracy and being left to get on with running a businesses.

The Motto: "Nihil Fortius - Semper Eadem" loosely translates as "We are the strongest and will never change"