From Heraldry of the World
Your site history : Feltham
Jump to navigation Jump to search 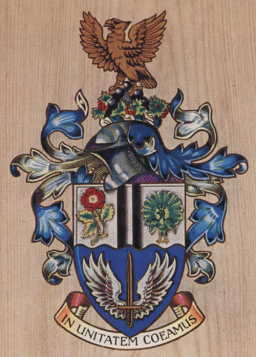 Arms : Per fesse wavy Argent and Azure in chief two Palets Sable between a Tudor Rose stalked slipped and leaved proper and a Peacock in his pride Vert and in base in front of two Wings conjoined of the first a Sword erect Or.
Crest :On a Wreath of the Colours within a Chaplet of Hawthorn fructed proper a Mount of Pellets thereon an Eagle wings expanded Or.
Motto: 'IN UNITATEM COEAMUS' - Let us go forward together

The wavy line and the silver and blue field indicate the Duke of Northumberland's River which takes the head-waters of the River Colne to Syon House, and the Longford River (also called the Queen's or Cardinal's River) which takes the Colne Waters to serve, the fountain and lakes of Hampton Court.
The two black palets represent railway lines and indicate Feltham's importance in the southern portion of the British Railways system.

The rose stands for the Tudor associations of Hanworth, particularly the claim that Elizabeth I spent much of her early childhood at Hanworth Manor. The peacock represents the topiary peacocks in the grounds of St Mary's Church, Bedfont, which are accepted as local emblems. The winged sword stands for the London Airport and the district's close association with the aircraft industry. The sword also refers to the Royal Army Ordnance Depot, and to the ancient sword-mill marked on a 17th century map.

The gunstones also allude to the R.A.O.C. Depot, and to the powder mills which formerly existed in the Crane Valley. The hawthorn refers to the Spelthorne Hundred, and the eagle is a reference not only of air traffic, but also of the old Roman road to the west which passed through the district.