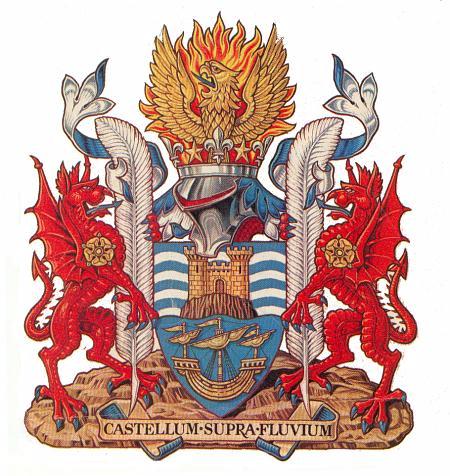 Arms: Per fess wavy azure and barry wavy of eight Argent and of the first in chief upon a Rock issuant proper a Castle of two towers Or and in base an Ancient three-masted Ship sail furled pennons flying Gold.
Crest: Out of a Coronet composed of four Fleurs-de-Lis Argent and as many Mullets Or set alternately upon a Rim Silver in front of Flames proper a demi eagle displayed Gold.
Supporters: On either side a Dragon Gules charged on the shoulder with a Rose Or barbed and seeded proper supporting between the forelegs an Ostrich Feather erect Argent; the whole upon a Compartment of Rocks proper.
Motto: 'CASTELLUM SUPRA FLUVIUM'

The arms were granted on October 10, 1962 and again to the present Town Council on April 16, 1975 with the backgrond of the upper and lower fields exchanged. 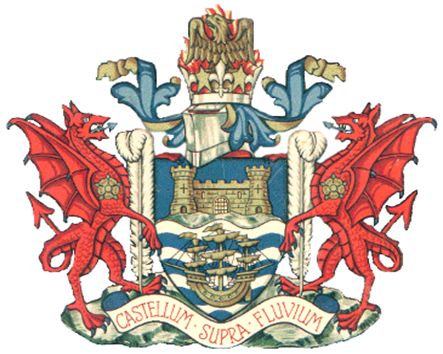 The shield is based on the ancient borough seal and shows that Flint is a sea port with a castle.

The supporters are the red dragon of Wales, each charged with a golden rose. This was the badge of Edward I, who founded the town and built the castle. The dragons hold ostrich feathers from the badge of the Prince of Wales. They stand upon a rocky compartment, depicting the area's rugged coastline and mountains.

The motto means A Castle on a River and echoes the design of the shield.