From Heraldry of the World
Your site history : Folkestone
Jump to navigation Jump to search 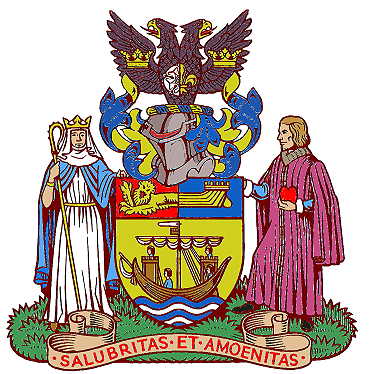 Arms : Or, on a water barry wavy in base proper an ancient ship with four men's heads therein apparent as represented on the ancient seal of the borough of Folkestone, also proper; on a chief per pale gules and azure a demi lion passant guardant dimidiated with the hull of a ship gold.
Crest : On a Wreath Or and Azure, a demi double-headed eagle displayed sable, beaked Or, charged on the breast with a rose argent, barbed and seeded proper, dimidiated with a fleur-de-lys gold, and on each wing a ducal coronet also gold.
Supporters : On the dexter side a figure representing St. Eanswyth proper crowned with an ancient crown and holding on the exterior hand a pastoral staff Or, and on the sinister side a figure representing William harvey, the physician, also proper holding in the exterior hand a heart gules.
Motto: ' SALUBRITAS ET AMOENITAS' - Healthiness and Delightfulness

The vessel and crew are derived from that depicted on the ancient seal. The lion joined to a ship's hull refers to the town's connection to the Cinque Ports, it being a corporate member of Dover.

The black double headed eagle is from the attributed arms of Julius Caesar, who according to legend landed near Folkestone.

The supporters are St Eanswyth, the daughter of King Eadbald, and the founder Abbess of the first Nunnery in England, which was established at Folkestone. The other is Dr William Harvey who discovered the circulation of the blood who was born in Folkestone.