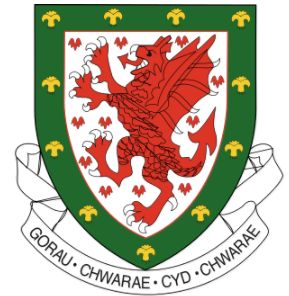 The arms were designed for the 75th anniversary of the Football Association of Wales in 1951. The rampant dragon previously used as a badge is set on ermine referring to the Royal patronage and to the arms of Wrexham where the Association is based.

The eleven gold leeks on green (a "full team") represent the Welsh teams, local or national, taking the field. The Welshmen who "wore leeks in their Monmouth caps" in battle have their descendants in both the players, who will henceforth wear the symbolic leeks in international matches, and the spectators, who have long brandished real ones.