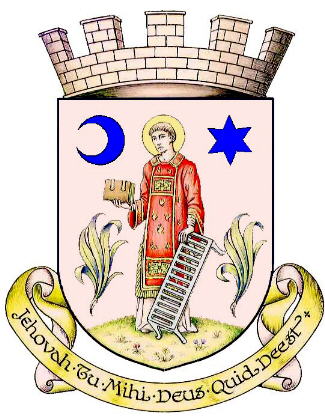 Argent, on a mount in base between two palm branches slipped Vert, the representation of Saint Lawrence, vested and holding in his dexter hand a book and leaning with his sinister upon a gridiron all Proper; in dexter chief an increscent and in sinister chief a mullet of six points, both Azure.

Above the Shield is placed a coronet suitable to a Royal Burgh and in an Escrol under the same this Motto "Jehovah Tu Mihi Deus Quid Deest".

The arms come straight from the Burgh seal of which a fifteenth-century impression is on record. St. Lawrence, the patron saint of the town, is vested in his traditional red and gold and stands in a meadow between two palms of victory. In his right hand he holds the Gospels and he leans upon the gridiron on which he suffered martyrdom. The crescent and the star are probably the moon and the sun and apparently have been coloured blue so as to relate them to recall a traditional saying of St. Lawrence: "The darkness is no darkness to me, but the night is all as clear as the morning that shineth more and more unto the perfect day."

The Latin motto, thought to be based on Deuteronomy 2:7, can be translated, "Eternal One, Thou art with me, what can be lacking?" 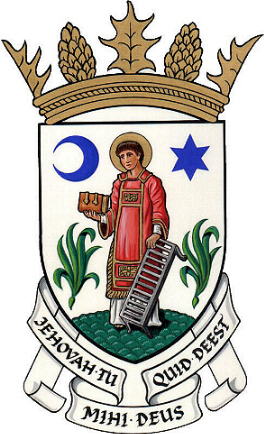 These are the burgh arms with a different crown.