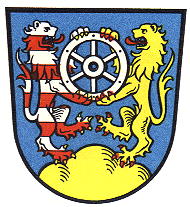 The arms show the three former rulers in parts of the district; the striped lion of Hessen, the wheel of the State of Mainz and the golden lion of the Lords of Itter. The canting mountain is taken from the arms of the city of Frankenberg.


From 1937-1950 unofficial arms were used in which the two lions were combined with a single head above the wheel.