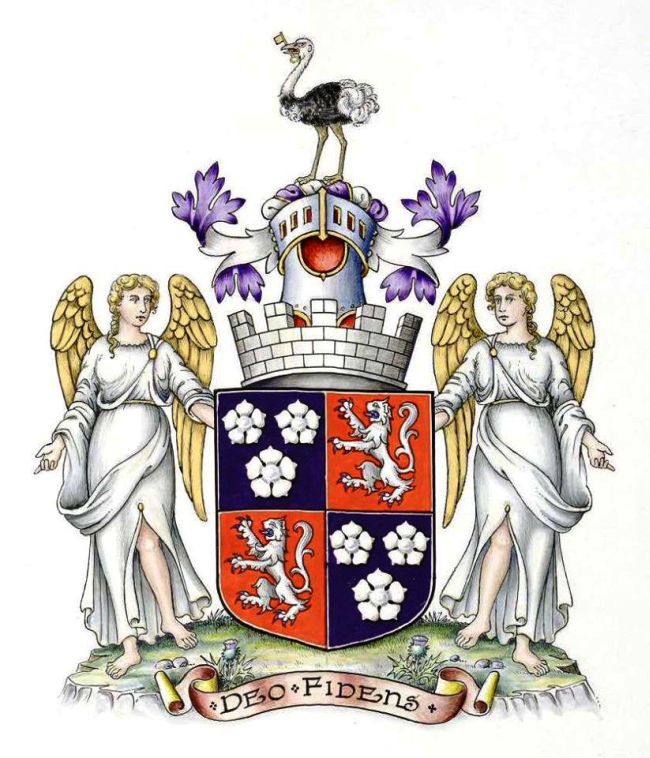 Above the Shield is set a coronet suit­ able to a Burgh, and thereon a Helmet befitting its degree with a Mantling Purpure doubled Argent, and on a Wreath of its Liveries is set for Crest an ostrich Proper holding in its beak a key Or, and on a Compartment below the Shield with this Motto "Deo Fidens", are set for Supporters two angels habited Proper, wings addorsed Or.

Some change of colours has also been made for difference: the field of the first and fourth quarters has been made purple instead of blue, and in the second and third quarters, the colours of the lion and the field have been interchanged.

In addition, the Fraser motto "In God is All" appears in a Latin version. 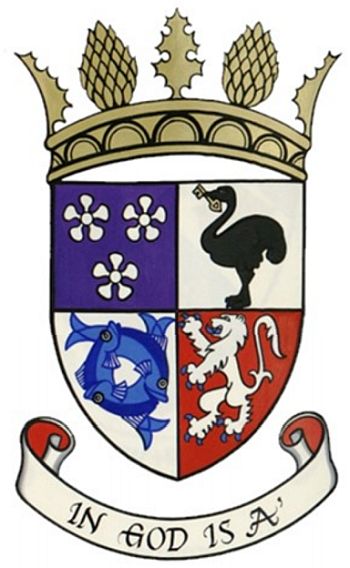 Above the Shield is placed a Coronet appropriate to a statutory Community Council, videlicet:- a circlet richly chased from which are issuant four thistle leaves (one and two halves visible) and four pine cones (two visible) Or, and in an Escrol below the same this Motto "In God is A"'.

The arms combine elements of the former Burgh arms.

The first quarter shows three Fraser cinquefoils or fraises, on a purple field for difference; the second has an ostrich (from the Philorth crest), holding the key of the town in its beak - this was the burgh crest; in the fourth is a silver Ross lion on a red field, denoting that the Frasers acquired Philorth through a Ross marriage. The three fretted fish in the third quarter remind us that Fraserburgh is a centre of the fishing industry. The motto is a Scots version of the Saltoun "In God is All".