From Heraldry of the World
Your site history : Fremantle
Jump to navigation Jump to search 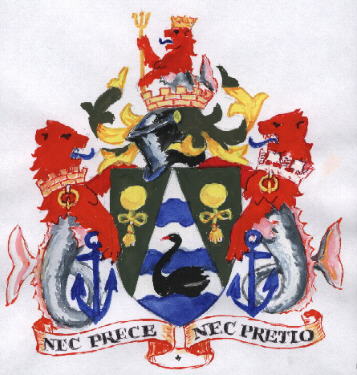 The shield refers to Fremantle's position as a port at the mouth of the Swan River.
The green areas represent an open cape or 'mantle', which is hanging 'free', that is, not tied by the tasseled cords, thus a rebus on the City's name.

The motto and crest derive from the arms of the Fremantle family, as it is named after Captain Charles Fremantle who, in 1829, took possession for Britain 'of all that part of New Holland, which is not included in the territory of New South Wales'. Changed are the lion, which has become a sea-lion, and the banner, which has been exchanged for a trident.

The supporters symbolise the City's connection with the sea, with the naval crown referring to maritime connections, and the mural crown to local government.

The round buckles hanging from the crowns commemorate Sir James Stirling, first governor of Western Australia, being a charge in his family Arms. The two red lions, from the Arms of Samson, also recall Captain Fremantle.