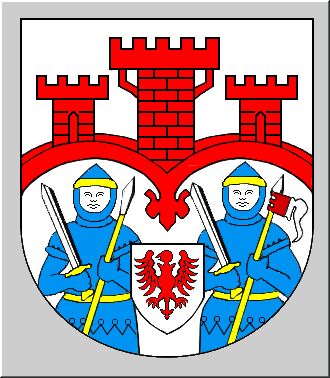 The arms were granted in 1997, but are of medieval origin.

The arms are based on the image of the oldest known seal of the city (see below), dating from 1343. The arms show a city wall and in the base the images of the founders of the city in 1244, Margraves Johann and Otto von Brandenburg. Between them there is a small shield with the arms of Brandenburg, a red eagle in silver.

The arms were first officially granted on September 30, 1939, but with a golden field. During the 1960 and 70s the shield returned to the original silver, which was confirmed in 1997.