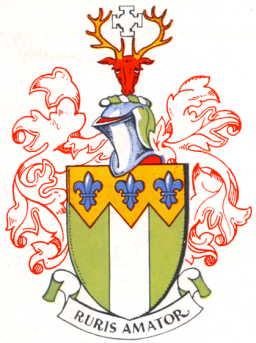 Arms: Vert a pale Argent on a chief dancetty of three points downward three fleurs-de-lis Azure.
Crest: On a Wreath Argent and Vert a Stag's Head caboshed Gules attired Or between the antlers a Cross potent quadrate Argent.
Motto 'RURIS AMATOR' - Lover of the country.

The white pale on the green background represents the Great North Road running between grassy borders. The fleurs-de-lis recall the district's royal associations in Elizabethan times.

The stag's head refers to the forest land ajoining Enfield Chase and the cross stands for the Knights of the Hospital of St. John of Jerusalem, with whom the priory was connected.