From Heraldry of the World
Your site history : Frigate Holger Danske, Danish Navy
Jump to navigation Jump to search 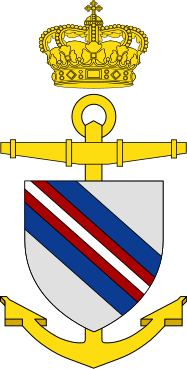 The Bend is in the Colours of the "Frihedskaemeperarmbindet" (The Liberty Strugglers Arm Band). This symbolises the Dansih Struggle against the German Occupation in 1940-1945. Holger Danske is a symbol of the Resistance and fighting spirit when Denmark is in peril. The Name was given to a former British Frigate transfered to Danish Service in 1945. Approved by HM the King on 15 April 1959.

Literature: Picture by Skjoldbro on Wikimedia Commons. Symbolism from the Book Dansk Orlogsheraldik.