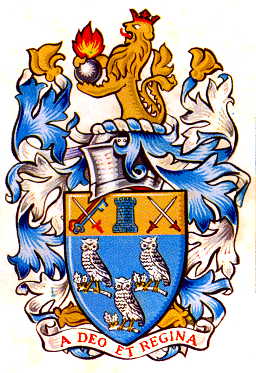 Arms : Azure three Owls Argent membered Or each perched on a Branch of Oak leaved also Argent fructed Gold on a Chief of the last a Tower also Azure between on the dexter a Sword in bend proper hilt and pomel Gules and two Keys in bend sinister addorsed and the bows interlaced the upper Gules the lower Azure and on the sinister two Swords in saltire also proper hilts and pomels also Gules.
Crest : On a Wreath of the Colours a demi Lion queue forchée Or cucally crowned Gules holding in the paws a Grenade fired proper.
Motto: 'A DEO ET REGINA' - From God and the Queen

The arms were officially granted on February 27, 1956.

The three owls are from the arms of the Le Marchant family, lords of the adjoining manor of Chobham, with the additional association that Major General John G. Le Marchant was appointed the first Lieutenant Governor of the Royal Military College. The branches of oak upon which the owls are perched come from the arms of the Surrey County Council and are ultimately derived from the heraldry of the Howards, Earls of Surrey, they also commemorate the fact that the district once formed the most southerly ride of the royal chase of Windsor Forest. The tower is from the crest of the Earls of Stanhope, with the crossed swords representing the Staff College at Camberley, the Royal Military College at Sandhurst and other local military associations.

The sword and keys are from the arms of Chertsey Abbey which was granted the manor of Frimley in Saxon times and held it until the dissolution of the monasteries in 1537 when it was granted to the Whites, passing to their descendants, the Tichbornes who are commemorated by the gold chief, which comes from their family arms.

The lion, holding a fired grenade, is also from the crest of the Earls of Stanhope. Camberley largely owes its origin to the Royal Military College which was moved here from Buckinghamshire largely through the influence of the daughter of the third Earl Stanhope. The forked tail of the lion alludes to the uniting of Frimley and Camberley as one local authority.

The motto, is adapted from the motto of the Stanhopes, which is 'A Deo et Rege'.