From Heraldry of the World
Your site history : Fyn
Jump to navigation Jump to search 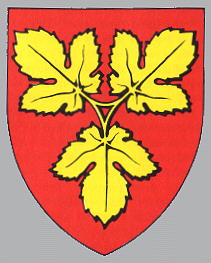 The arms show thee hops-leaves one for each of the three former amtskommuner that exited in the territory (Assens Amt was already added to Odense Amt in 1793). The hops are taken from a describtion of the island by its most famous author, H. C. Andersen, who wrote about the hops-gardens in Fyn.