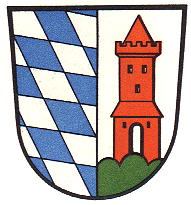 Günzburg has been a city since the 14th century, but the oldest seals date from the 15th century. From the 15th to the end of the 18th century the seals showed a shield with in the right part the counting castle (Burg=castle) and in the left part the arms of the County Burgau, in which the city was situated. Before that the tower was shown next to the Austrian arms, as the city was a possession of the Austrian Dukes. Since 1717 the position of the castle and Burgau arms was replaced, the castle being on the left side, just as today. When the city became a possession of Bayern in the early 19th century, the Burgau arms were replaced by the diamonds of Bayern. The last change was made in the last century when the castle was placed on a hill.