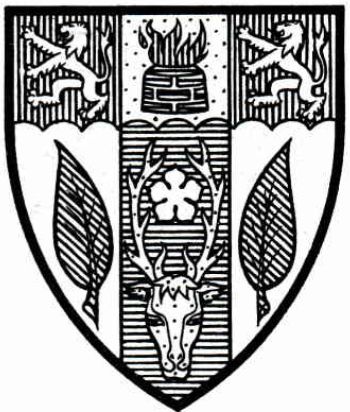 Argent, on a pale Azure between two laurel leaves slipped Vert, a caberfeidh Or with a cinquefoil of the First between its attires; on a chief engrailed Gules, a pale of the Fourth between two lions rampant of the First, the pale charged of a beacon Azure masoned Argent and enflamed of the Fifth.

A differenced version of the arms of Ross and Cromarty County Council. The party line below the chief has been made engrailed and there has been some re­ arrangement of the main features-the Ross lions, the MacLeod beacon and the Mackenzie caberfeidh.

A silver cinquefoil and two laurel leaves have been added in special reference to the Mackenzies of Gairloch. The beacon has been given special promi­nence because of the former MacLeod connection with the district.