From Heraldry of the World
Your site history : Galashiels
Jump to navigation Jump to search 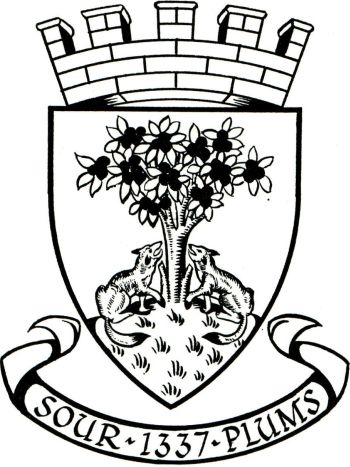 Argent, issuing from a mount in base a plum tree fructed between two foxes sejant, that on the dexter contournee, both looking upwards all Proper.

Above the Shield is placed a Burghal coronet and in an Escrol below the Shield this Motto and Date "Sour 1337 Plums".

Galashiels was created a Burgh of Barony in favour of James Hoppringill (or Pringle), of Galashiels, in 1599.

The arms come from the Burgh seal, though their origin is uncertain.

One theory claims that they commemorate a successful skirmish in 1337 against a band of Englishmen at a place called Englishman's Sykejust outside the town. The English were gathering the wild plums of the district when they were surprised and overcome by a group of local men who, after their victory, called themselves "the sour plums in Galashiels". A song with the same title, whose words have long been forgotten, was written about their exploits; its tune was a favourite of Sir Waiter Scott's uncle, Thomas Scott, a noted piper in his day.

The motto also relates to the incident.

The arms are now used by the Galashiels and Langlee Community Council.