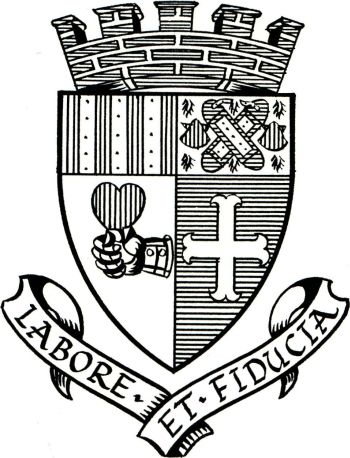 Per pale: dexter, Argent, a dexter hand in a steel gauntlet Proper fessways, holding up a heart Gules, and on a chief Gules three pallets Or; sinister, Azure, a cross moline Argent, on a chief Ermine two weavers' shuttles saltirewise Azure, threaded Or, between as many escallops Gules.

And in an Escrol below the Shield which is ensigned of a coronet befitting a Police Burgh (videlicet: Azure masoned Argent) is placed this Motto "Labore Et Fiducia".

The arms were officially granted on February 27, 1964.

The arms show on the dexter side the Keith family arms to recall Sir William Keith of Galston who brought back to Scotland the heart of King Robert I after Sir James Douglas, who was taking it to the Holy Land, had been killed fighting the Moors in Spain.

The mailed hand with the heart were specially included to commemorate this famous deed and also to make a canting reference to the neighbouring family of Lockhart of Barr, one of whom, John Lockhart, was well known for his support of John Knox and the Reformers.

On the sinister side are the arms of Bentinck, the Duke of Portland being the Superior of the Burgh.
The red shells on the ermine field allude to Campbell of Cessnock; Cessnock Castle was the original Tower of Garliestoun from which the town derived its name.

The crossed shuttles are shown as a crest on the Burgh seal and refer to the weaving industry for which the town was once well known.

The Latin motto - "By work and by confidence" - comes from the seal and is said to have been adopted by Galston in its early days.