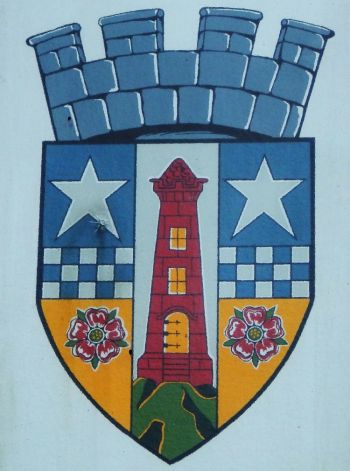 Per fess Azure and Or, a fess chequy Argent and of the First between two mullets in chief of the Third, and as many roses Gules, barbed and seeded Vert, in base; over all a pale of the Third charged with a tower of the Fourth, windows and port of the Second, situated upon a mount of the Fifth.

The said Shield is ensigned of a coronet appropriate to a Burgh.

Gatehouse-of-Fleet was created a Burgh of Barony in 1795 in favour of James Murray of Broughton and Cally.

The arms are based on those of Murray of Broughton which have silver stars on a blue field (for Murray), a silver/blue fess chequy on a gold field (for Stewart of Dalwinton and Stewart of Girthon) and two red roses (for Lennox of Cally).

The tower represents the Burgh Clock Tower, built partly by a bequest and partly by public subscription in 1871, a representation of which appeared on the seal adopted by the Burgh in 1894; its colour recalls the Stewarts of Garlies, ancestors of the present Earls of Galloway, another family associated with the district, since red is one of their livery colours.